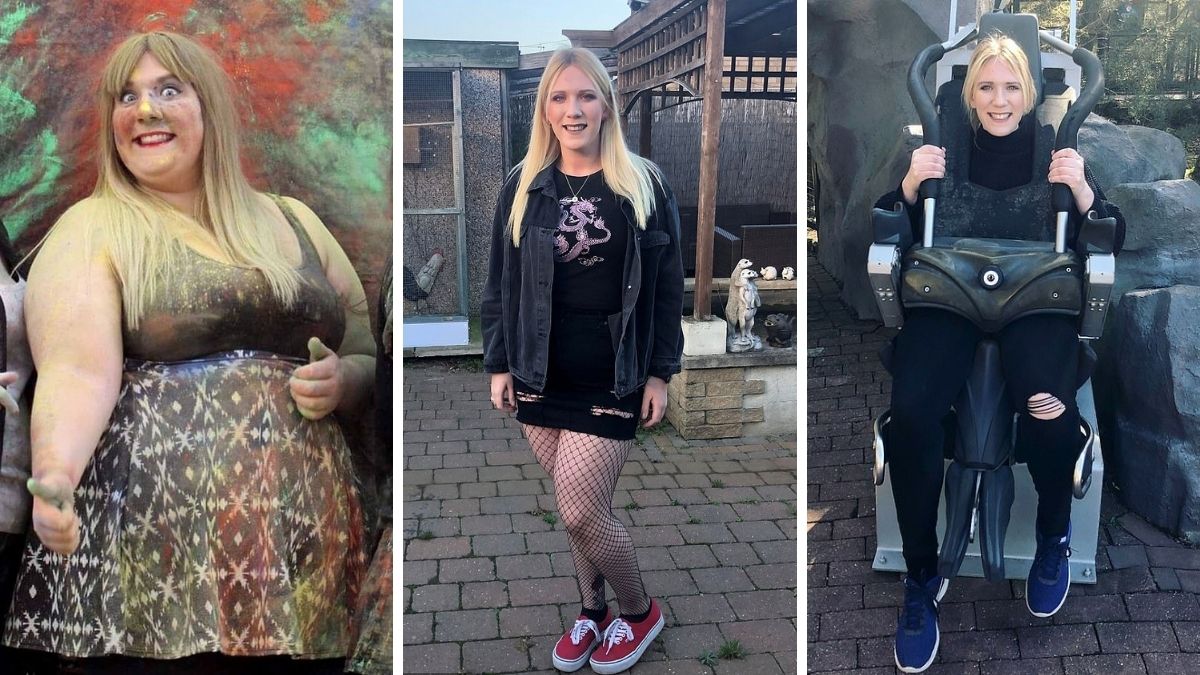 In 2017 Sophie Trewick was looking forward to a day of fun at the Alton Towers amusement park in Staffordshire, England. Instead of leaving with an anticipated smile on her face, Sophie left the theme park mortified but motivated to change.

Trewick and all of her friends were given fast track passes so that they wouldn’t have to wait in the long lines to see if she would be able to “fit on each rollercoaster.”

Sophie was a 331 pound college student at the time and the Alton Towers staff believed that because of her size she may not be small enough to fit safely on the rides. Unfortunately for Trewick, the fast track passes would make no difference to her experience except expediting her embarrassment. Sophie was quoted telling the Daily Mail, “I felt ashamed and humiliated when I was turned away from each ride.”

As if being rejected from a day of fun over and over again wasn’t humiliation enough, one of Sophie’s friends humiliated her even further. Sophie says of the moment, “It was so embarrassing. One of my friends actually said to me ‘I am glad you are fat as we get to jump straight to the front.’”

I felt ashamed and humiliated when I was turned away from each ride.

While the embarrassment and hurt was immense that day, it catalyzed Sophie to make serious changes in her life moving forward. Sophie is quoted saying, “I went home that day distraught, and knew I had to change. I joined Slimming World the same week and I have never looked back.”

Slimming World is a weight loss program and community that approaches losing weight with a no-hunger eating plan, gently introduced activity, and an incredible support system. Founder Margaret Miles-Bramwell OBE created Slimming World in 1969 in an attempt to provide others with a positive and different approach to weight management. Sophie clearly found the right weight loss program for herself because in the two years following that embarrassing day at Alton Towers, Sophie lost 140 pounds!

At 11, she became addicted to food

Sophie’s struggles with her weight all began in her childhood when she dislocated a hip during gym class and was unable to exercise throughout her recovery. Additionally, at the age of 11, she became addicted to fast food, and her relationship with food spiraled completely out of control.

As time went on, Sophie didn’t learn how to properly prepare meals for herself and she would choose to purchase takeout food from restaurants instead of cooking at home. Trewick was so self-conscious about receiving judgemental looks from her peers that she would take cab rides to campus instead of walking. Sophie’s main comfort foods of choice were Domino’s pizza, cheesy chips, bacon sandwiches, and chocolate brownies.

Tiptoe if you must, but take the steps.

But now Trewick makes healthier food choices and her success can be seen in the many before and after photographs on her Instagram page. After the incredible weight loss, Sophie has even returned to Alton Towers and enjoyed the rollercoasters without the fear of being turned away from each ride. Her incredible transformation however is most evident in the brilliance of her smile and renewal of self-confidence shining through in her Instagram photos.

She changed the narrative by converting a negative to a positive

In November of 2020, Sophie raised money for bone cancer by entering a fitness challenge requiring her to do 2,000 burpees during the month of November. She regularly shares her journey online through her Instagram page where she posts pictures of her adorable Labradors, her fiancée, incredible Slimming World approved meals, and of course, her radiant self!

In a caption of a before and after weight loss picture, Sophie says on Instagram, “summers consist of long walks, bike rides, and fun instead of hiding away in my bedroom.” The caption tells a tale of a woman’s triumph but also years of incredible pain.

Sometimes taking the smallest step in the right direction ends up being the biggest step of your life.

Sometimes motivation comes from unlikely places. When you take a negative and turn it into a positive, you gain control over your agency and this can change the narrative to your whole life. Sophie may have gone home distraught on that first day at Alton Towers, but within years of that nightmarish incident, she returned to the amusement park and finally had that fun and gleeful time she anticipated having back in 2017.

Sophie owned her destiny. She did not let negativity get her down for long; she repackaged it to propel herself and made a change for the better. Sophie’s healthy lifestyle has transformed her life. In doing what she thought was impossible she has proved to herself and to any onlookers that change is within reach. While sometimes the events that motivate us to make those changes in our lives are traumatizing, upsetting, and hurtful, that doesn’t mean that we can’t utilize them to our advantage so that we can live fuller lives. Sophie took control of her situation and as a result, is living a positive and healthy lifestyle.

There is victory in defeat if you look at it from a different angle. Life is a marathon, not a sprint. To quote Sophie herself, “sometimes taking the smallest step in the right direction ends up being the biggest step of your life. Tiptoe if you must, but take the steps.” Take the steps required to get to the place you want to be in life. Even if you start with baby steps, as long as you’re moving forward in a certain direction, eventually you will be successful!