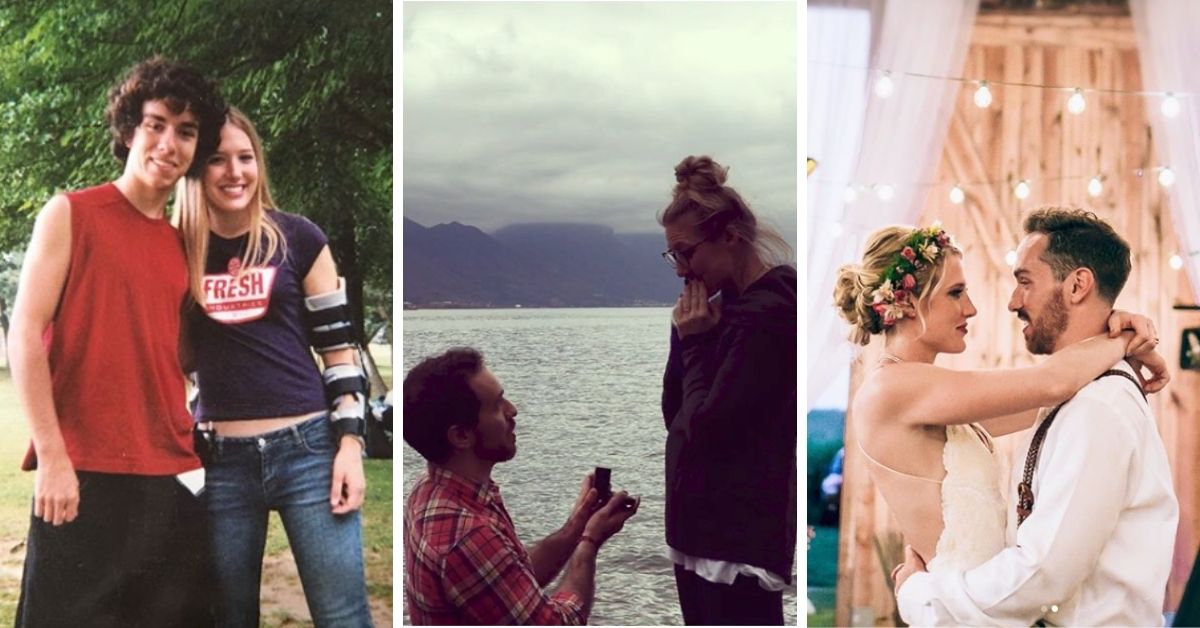 The reality of suicide is as devastating as any loss of life from disease, accident or murder. Kevin Walsh was on the brink of becoming a part of those tragic casualties.

In 2017, Kevin was on the verge of committing suicide when he got an unexpected phone call from someone very special: his first teenage crush, Blake Moore.

Blake didn’t know it, but that phone call saved Kevin’s life. Now, a decade later, the two are married.

A fateful meeting at camp

It all started when the two youngsters met at Bair Lake Bible Camp in Michigan, when they were 13.

“The prettiest
girl I’d ever seen walked right up to me and said, ‘Black is a good color on
you.’ No idea why. We chatted and became friends, exchanged AIM screen names
(it was the time) and stayed in touch for a while,” Kevin wrote on a Quora
thread about real-life moments that seem like something out of a
movie.

As often happens with camp or school friends, over the years, their communication slowly faded away but Kevin never forgot about Blake.

As it turns out, Blake never forgot about him either

During his senior year of high school, Kevin wasn’t doing well. He was struggling with depression and suicidal thoughts. He even planned to take his life after graduation. But then he got a phone call that changed everything.

“Somewhere between 5 and 10 seconds before I would have committed suicide, my phone rang. I checked the caller ID ― I couldn’t die not knowing,” Kevin wrote on Quora.

It was a number I didn’t recognize, so I picked up and it was her.

“It was her. We hadn’t talked in a year and the one person I believed I would have opened up to called at that exact moment I had let everything go and was at peak vulnerability,” he said.

He continued: “I asked her what was up and she said she just felt like she had to call me. At that point it had been a year since we had spoken, and at that moment she just had to call. Long story short, she pried, I spilled the beans and she talked me out of it. I mean she literally said ‘What? Don’t do that.’ And that was that.”

Blake, however, remembers the story differently. “Honestly, I think both our phones rang and we both picked up. I can’t explain it. We didn’t even know until after we got married that we remembered it differently,” Kevin told HuffPost. “It definitely adds another layer of goosebumps to the whole thing.”

Regardless of how it happened, the phone call was definitely a turning point for Kevin.

At first it was just confusing. We hadn’t talked in over a year, why was she calling now? Then I was glad she’d be the last person I talked to. And then, well, it meant everything. Her words just woke me up.

After that, the two reconnected

In the time that followed, the couple got to know each other again. Ultimately, they got into a relationship. Kevin eventually proposed during a vacation together in April 2016.

After that fateful phone call, Kevin wrote down his thoughts in a journal. In there, he also thanked Blake for re-entering his life at the right moment. “Over the years, [the journal] grew a couple words at a time,” he said.

Eventually I had a pretty substantial amount of information I wanted to convey and then I realized, ‘Holy crap, I think this is a proposal.’

On September 17th, 2016, they married in Marshall, Michigan.

Reach out to your loved ones

While they lived happily ever after, it doesn’t change that many people who have suffered from depression did not have a happy ending. That’s something Kevin does not want to brush off.

“Where I was incredibly lucky for Blake to have called me, many people aren’t. So to anyone having thoughts of suicide, PLEASE talk to someone. Anyone,” he said.

Give someone the chance to care about you. And if you’re not in that place, please consider taking the time to learn the warning signs and to become prepared if you’re ever on Blake’s side of that phone call.

If you are dealing with suicidal thoughts or you know someone who may be at risk for suicide, please seek help as soon as possible.

You can contact the U.S. National Suicide Prevention Hotline at 800-273-TALK (8225), call 911 or reach out to friends/family members who can stay with you until help arrives.

How to Get Out of Your Head and Show Up for Your Life
40 Reasons You’re Amazing and Worth Appreciating
You Won’t Find The Rainbow If You’re Always Chasing Storms
Don’t You Dare Give Up On Yourself – Motivational Video
Giveaway: Win Tiny Buddha’s Mindfulness Kit for You and a Loved One!