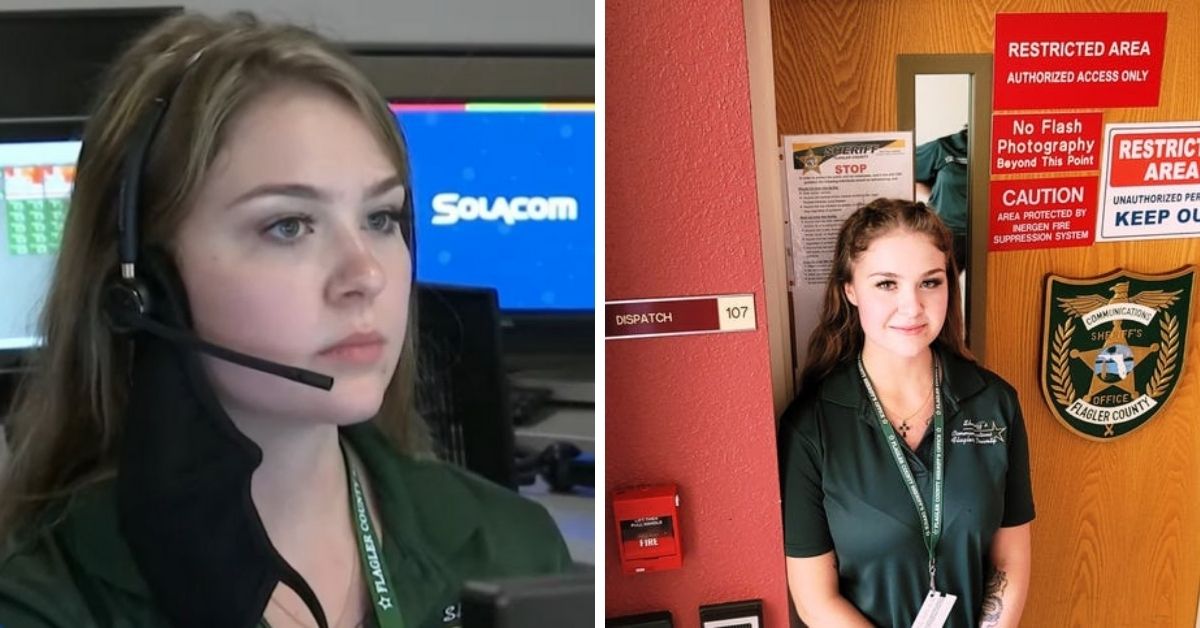 911 dispatchers are some of the greatest heroes out there, even if the world doesn’t always see their contribution to saving lines. They are on the front lines of emergencies, even if their work remains behind the scene.

Recently one Florida 911 operator proved just how heroic 911 dispatchers are when she saved not one but two lives, all from her office.

One afternoon that changed it all

McKenzie Davis, 21, works as a 911 dispatcher at the Flagler County Sheriff’s Office. One day, at 3:33 PM, she answered a call from a frantic mother, who told her that her 6-month-old baby had stopped breathing.

Without panicking, she calmed down the mother and instructed her on how to perform CPR.

The baby was turning color and I knew it needed CPR right away. That mother, she listened and did a really great job.

McKenzie even counted with her, so she could make sure that the compressions were performed at the proper speed.

Soon, the baby began breathing and moving again after the full round of CPR was administered. He was then sent to a children’s hospital for further investigation. “When the mother told me the baby was breathing, it was a weight lifted off my chest,” McKenzie said.

I think I did a pretty loud exhale. When she told me the baby was crying, I said ‘That’s good. That means he’s breathing.’

But for McKenzie, this was more than just her job.

“I have a 7-month-old niece,” McKenzie said. “She is my world, so this one hit close to home for me. Still, you have to stay detached [from emotion] because you have to remain calm and get that baby breathing.”

An hour later, a second call came in

But just an hour later, she got another call. Believe it or not, it was a similar case, which also required the same level of quick thinking.

As soon as I picked up the phone, I knew it was going to be a bad one.

At first, McKenzie couldn’t understand what the woman was saying because she was screaming.

“When somebody is screaming on the phone, you can’t understand what they are saying,” McKenzie said, who has been a dispatcher for two years. “You have to get them to take a deep breath and have them explain the situation.”

Eventually, she was able to calm the woman down and understood that her elderly husband was in the swimming pool and had stopped breathing. First, she instructed her to get him out of the pool.

“The deputies arrived there very fast and they immediately took over the situation,” McKenzie said. “They took the phone and told me ‘We’re here. There’s no pulse. You can hang up.’”

However, by the time the paramedics had arrived, the man had a pulse. He is expected to make a full recovery.

There is no routine in McKenzie’s job

The job of a 911 dispatcher is no easy one. As soon as she hung up on her second, life-saving call, McKenzie went right back to work. She didn’t even know if the old man had made it.

“9-1-1 is the number you call in your darkest hour and it is the voice on the other end of the line that can help you through whatever situation you are facing,” Flagler County Sheriff Rick Staly said in a statement.

And everyday brings its own challenges with it. McKenzie said there are no typical days.

She credits her training for ability to save two lives in one day. “This is one of those things where we are trained where you have to move on to the next call,” she said.

If I was still freaked out about the 6-month-old baby, I wouldn’t necessarily been there to help the 71-year-old.

“After those sort of phone calls, you take your time, re-gather yourself and you have to be there for the next person who needs you,” she continued.

It turns out McKenzie has saved a total of four lives this year. “She is a true hero and a great partner with our deputies in the field, Sheriff Rick Staly said.

And despite it all, she doesn’t consider herself a hero, crediting her whole team instead.

“My teammates help me so much, every single one of them,” she said. “They have advanced my training, given me advice. We all help each other to make ourselves the best we can.”

McKenzie’s dedication to her work literally saved 2 lives (4 lives in total!) Even if she had no idea what the outcome would be, she did everything in her power to help the victims, without being there in person.

It may seem like a 911 dispatcher can only do so much when terrible situations arise, but McKenzie proves otherwise. Never underestimate your impact.

How to treat itchy, dry skin this winter
40 Reasons You’re Amazing and Worth Appreciating
People Who Achieve Their Dreams All Share This One Trait, According to Billionaire Sara Blakely
The Weeknd to headline 2021 Super Bowl LV halftime show
A COVID-19 vaccine will be ‘worth the wait’: Doctor answers coronavirus questions