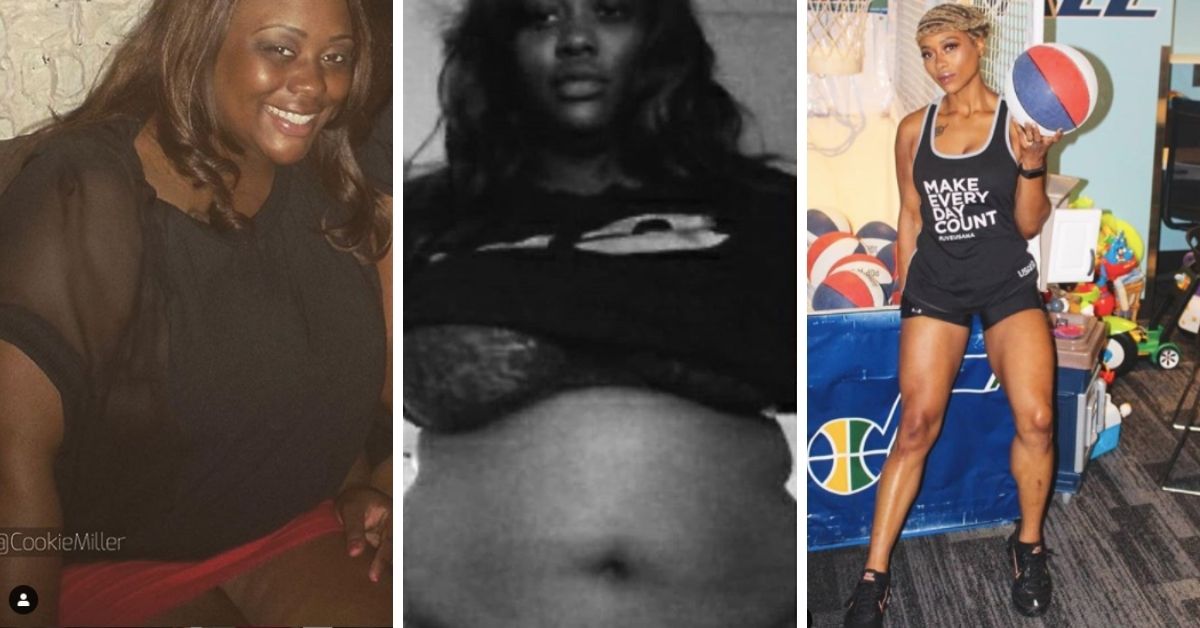 Cookie Miller struggled with her weight for most of her life, but it wasn’t until she became so unhappy with the way she looked, that she knew something had to change.

At her heaviest, she weighed 240 pounds and was diagnosed as pre-diabetic.

“Not only was I physically heavy, I felt heavy emotionally. I felt everything that I was; unhealthy, unmotivated, sick and sad,” Miller, of New Orleans, Louisiana told the Daily Mail.

College changed her life for the worst

She had been a track runner all throughout her teenage years, but after all her friends graduated, she quit in her senior year.

Looking back, Miller said that it was once she moved to college that her food addiction got really “out of control.”

So many unhealthy foods are embedded in the culture of where I am from, I believe that’s a factor. It’s so normal to have a very heavy dinner every day of the week.

“What some may view as weekend meals or special occasion food was something we ate daily,” she said.

She remembers going back home to visit and it got to a point where her friends were unable to recognize her.

A devastating diagnosis took her by surprise

Then, Cookie got another devastating diagnosis; she found out she had Acanthosis Nigricans, a skin disorder that causes thick and dark patches of skin to typically appear in the neck, armpits and groin.

The condition is often associated with obesity and insulin resistance.

“I was diagnosed with pre-diabetes and Acanthosis Nigricans. Can you believe that wasn’t enough to light the fire?” Miller said.

“It was not until I was so unhappy with how I looked that something had to change. Some people will not say this, but, truthfully, aesthetics had more to do with it than health initially,” she continued.

Miller was ready to tackle her depression and confront her addiction to food, and tried everything from P90X to diet pills and everything in between to lose weight, but nothing worked.

Food addiction is very real. That was and is still the hardest part. I really hope to not have to struggle with it at some point, but it is a daily struggle with some days being better than others.

The running group that changed her life

It wasn’t until September 2012, after a friend invited her to run with a running group at a local park, that something clicked.

Cookie took up her friend’s offer, but quickly became short of breath, and couldn’t keep up with the rest of the runners.

Instead of giving up, Miller saw an opportunity to turn her disappointment into motivation and overhaul her lifestyle. So, she returned to join the running group the following day.

Having rekindled her love for running, she started training for a 5k, got a gym membership and began tracking her food intake.

“I am so aware of portion size when it comes to food. I am still such a foodie and love to “see” a large serving so I still have large servings of food, but healthier options. It’s all a mind trick,” said Miller.

In November 2012, she ran a 5k in honour of her grandmother, and by that time had lost at least 30 pounds.

Within the following year, she did as many as 10 races, including a Spartan Race, and by November 2013, she was down 70 pounds.

Accountability is key to her journey

To keep herself accountable, Cookie started posting her progress photos on Instagram and was swarmed with requests for help losing weight.

Feeling inspired, she took a chance and started taking classes to become a certified personal trainer. She completed her certification and began training clients before her and after her office job.

Eventually, she quit her job to pursue her passion for coaching full-time and her success story even landed her an appearance on the Dr. Oz show.

Miller’s transformation journey taught her the value of consistency and of never giving up. She’s lost a total of 100 pounds and has kept it off for over 6 years.

“I am so confident in who I am now. I know that I am strong because of the challenges I overcame to get to this point. It’s such a confidence booster,” she said.

Her most important advice?

Cookie leaves us with one last piece of advice, that certainly resonates with any goal, big or small.

There will never be a perfect time where all the stars align. Something will always be in the way, so do yourself a favour and get going now.