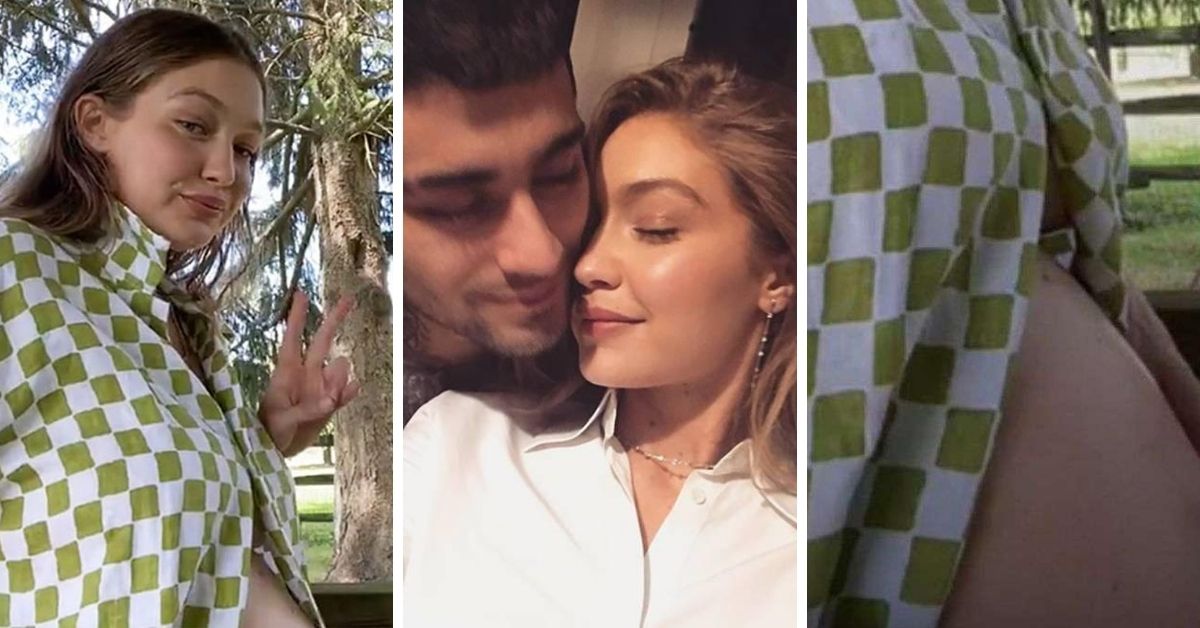 Gigi Hadid shocked the internet earlier this year when she announced her pregnancy. She and Zayn Malik have been on-and-off for a long time, so it was a genuine surprise for fans to learn that their favorite celebrity couple were embarking upon this new journey together.

A couple having a child is often framed as their ultimate “happy ending.” Even though the development in and of itself might not indicate anything about the state of their relationship. Nevertheless, some fans had been eagerly awaiting this moment and couldn’t wait to follow Gigi, Zayn and their adventures through all the stages of impending parenthood.

But things did not go as expected. After an initial announcement, Gigi actually went mum about her pregnancy and ended up sharing very little about it. For a celebrity who’s practically built her reputation from a dazzling social media presence, it was indeed odd for Gigi to draw a veil over what is surely a significant period for her.

However, Gigi finally did come clean about her choice. Her reasoning for wanting to keep her pregnancy quiet stemmed not from a personal motive but a social one. And if you consider her controversial past, her decision indicates a level of growth for the young model.

Gigi’s explanation of why she’s been keeping her pregnancy under wraps was first hinted at during a Twitter thread. After British Vogue posted a link to an article headlined  “Gigi Hadid Reveals How She Disguises Her Pregnancy,” Gigi decided to take a stand.

She first said that she was simply wearing a baggy jumpsuit and that the side angle would tell a much different story. Then she added that she wasn’t trying to hide anything intentionally. She reaffirmed that this was an intimate occasion for herself and her family members. For that reason, she was “proudly experiencing” the pregnancy with loved ones.

But in an Instagram live feed held the following week, Gigi elaborated on why she’s been not as candid regarding her pregnancy.

That’s a reason that I felt that it’s not really something that I need to share apart from with my family and friends. Obviously a lot of people have lost lives due to coronavirus that was in the beginning of quarantine and still happening. And then we moved obviously into the reemergence of the BLM [Black Lives Matter] movement, and I thought that our presence on social media should be used for that.

Gigi added that her pregnancy is hardly the most important thing happening in the world at the moment. Being pregnant through a pandemic makes her experience certainly more unusual than that of many other women.

Therefore, she’s careful about sharing those sweet moments, especially as much of the world is suffering under the weight of both the virus as well as its widespread socioeconomic consequences. The discourse surrounding anti-racist activism has also amped up in recent months.

Her socially-conscious approach underlines how much she has grown

Though it is quite admirable for Gigi to reveal why she’s been trying to keep this moment hush-hush, her justification must be viewed in light of some past instances. In 2017, Gigi was caught squinting while holding a Buddha-shaped cookie in a gesture that was widely believed to be mocking Asian features.

Her social media was subsequently flooded with snake and chicken emojis from Chinese fans who seemingly did not want her to come to their country for an upcoming fashion show. Gigi later ended up pulling out of Victoria’s Secret fashion show in Shanghai and even issued an apology on the Chinese social media platform Weibo.

It hurts me to hurt anyone, and I want you all to know that it was never my intent to offend anyone through my actions and I sincerely apologize to those who were hurt or felt let down by me.

This wasn’t even Gigi’s only brush with an incident that was thought to be racist or problematic. In a magazine cover for Vogue Italia, Gigi and the male model next to whom she was posing were accused of doing blackface.

Gigi once had to take to social media to address the concerns. She explained that she had no control over the “creative direction” of the shoot and that a bunch of bronzer was applied to her skin, rendering it darker than usual. She assured her fans that things would be different if she had more control over the shoot.

Gigi is focused on the “experience” of pregnancy, not the sharing

On account of these eye-raising incidents, many might be inclined to think that Gigi’s latest show of support for Black Lives Matter might not be genuine enough. However, it’s worthwhile to acknowledge when people do take a stand for issues they might not have cared about before.

If someone says that they’re going to make more of a concerted effort in changing, then we should give them the space to learn and do better.

Gigi took note of her fans’ concerns when she was criticized and years down the line voiced her support for anti-racism initiatives. She learnt from her mistakes and focused her energies on making a difference. Even as the world expected her to share private moments of her life.

Despite her reluctance at sharing, the model said that she’s been quiet documenting her experiences. She also hopes to give this access to her fans down the line.

And I will be sharing stuff like that in the future. I just am not rushed to do it, and I feel like right now I just want to experience it, and I write in my journal a lot, and I just don’t want to worry about waking up every day during my pregnancy and like worry about having to like look cute or post something and like so, a lot of questions were about that and I just wanted to do that.

What Gigi refers to her is a common experience among many pregnant women. You’re experiencing something really intense and life-transforming, you’re simultaneously at your most vulnerable and your strongest, which begs the question: why is there any pressure at all to disclose those private moments for public consumption?

Celebrities may be public figures but there’s still a line that shouldn’t be crossed. The public may admire, appreciate, and even criticize these figures but nowhere does it say that they’re entitled to the most personal moments of their life.

The pressure to have to look “cute” during your pregnancy just so others behind a screen can idolize some pristine image of yourself is frankly too much. And it’s completely up to Gigi on how much she wants to share. The appropriate amount is the amount she herself picks.

Sometimes it may feel like the world is nearing its end and that all the doom and gloom is leading to nothing but greater pain, suffering, hate, and death. But small changes within a person’s behavior make you realize that there’s indeed hope left in this world. It only takes one person to start affecting change on a bigger scale, and so Gigi’s development from a tone-deaf young model to an empowered, aware mom-to-be should indeed be celebrated.

If she herself can take those small steps towards making this world a better place, it’s possible for others to watch her process and follow in her footsteps.

They too can begin their own journey in terms of self-development, realization, and nurturing their voice pertaining to social issues. You yourself can complete your journey of discovery but you do have to give yourself the time and space to grow, learn, and change.