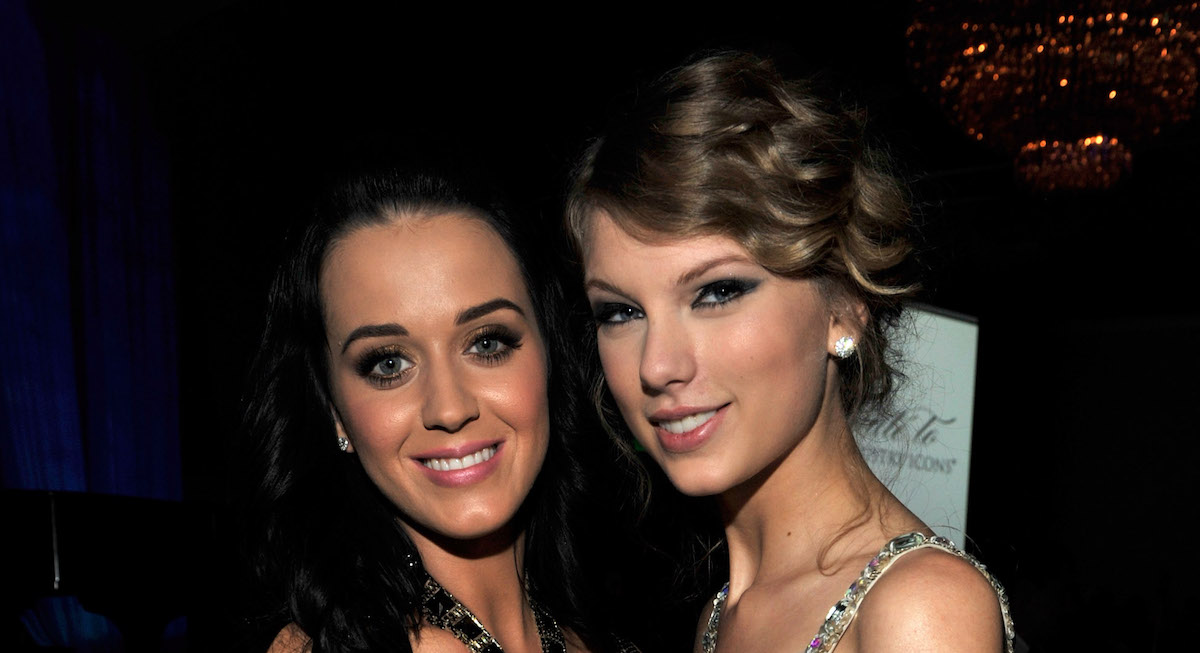 As two of the most beloved pop stars on the planet, Taylor Swift and Katy Perry have each faced a tremendous amount of scrutiny from the public.

Pitting female celebrities against each other has been a time-honoured tradition in Hollywood, something that’s been as inherent to the industry as saying ‘Lights, Camera, Action!’ Seeing how the two are strong personalities in terms of their style, sound, and passion; is there any doubt why the media thrust them against each other in a diva-off?

While many pairs of women have subverted this unfair expectation and have gone on to develop an unbreakable, long-lasting friendship, Taylor and Katy haven’t quite taken that route. The two engaged in a massive public feud for years, a public animosity that ended up being so long and ridiculous that it roped in a whole bunch of other celebrities along the way.  While we certainly relished the drama, we also couldn’t help but accuse them of being petty and immature.

But there’s indeed a happy ending to the feud. At least, we can confirm so at the time of writing. Though the two powerhouses are no longer involved in the feud, its shadow continues to loom over their heads. Therefore, as everyone jams out to Taylor Swift’s latest album Folklore, it’s time to acknowledge the strides she and Katy have made over the years, including the good, bad, and the ugly.

One unique thing about this feud is that the boy-drama was over and done with early on. Actually, if you go further back in time, there wasn’t a feud at all; the two young artists adored each other up until the 2010s. They sent messages of support towards each other and even threw parties for one another. It was quite a fairytale of a female friendship that unfortunately ran into a number of challenges.

The rift may have begun when Katy Perry began dating John Mayer in 2012. Just two years earlier, Taylor has been in a relationship with John and it is presumed that her song ‘Dear John’ was written about him.

It’s worth noting that in the land of Hollywood, friends dating each other’s exes is hardly rare. Celebrities are always crossing each other’s paths and it may very well be an innocent coincidence that Katy and John chose to get together. While this wasn’t the triggering point of their feud, it may have certainly set the stage for what occurred shortly.

In 2012, three back-up dancers in Taylor Swift’s Red world tour were offered to join Katy Perry’s Prism tour the following year. Taking part in Katy’s tour meant that they would have to leave Taylor’s tour while it was still ongoing. The dancers left on their own accord, unbeknownst to the fact that their actions likely sparked a over-the-top feud between two mega-famous artists.

Taylor addressed the situation in a 2014 interview but never referred to Katy by name.

And it wasn’t even about a guy! It had to do with business. She basically tried to sabotage an entire arena tour. She tried to hire a bunch of people out from under me […] So now I have to avoid her. It’s awkward, and I don’t like it. I know people will make it this big girl-fight thing. But I just want people to know it’s not about a guy.

A day after Taylor’s scathing interview, Katy issued her own cryptic response:

So it was becoming increasingly clear that there was something hostile brewing between the two ladies. And it only got worse.

The feud ramped up via music videos, Twitter reactions and even Nicki Minaj

Over the next couple of years, the feud between Taylor and Katy continued in the form of many indirect messages. First, Taylor asserted that she would never talk about Katy in an interview, stating, “It’s not real if someone appears to never have any issues with anyone. I have my friends. I have enemies.”

Then Taylor shocked the internet by releasing her ‘Bad Blood’ music video. The narrative of the video clearly references a fight between two women. Taylor is seen gathering her own “squad” to help her defend against this other woman widely presumed to be a representation of Katy Perry. The video ends in a face-off between the two crews of women. Since so many of Taylor’s own celebrity friends took part in the video, the 1989 singer was accused of ganging up on Katy.

Then, a mini-feud transpired between Taylor and Nicki Minaj. Without going into it too much, Taylor believed she was being singled out by Nicki when the latter went on a rant about how the music industry doesn’t value anyone who doesn’t have a “white” or “slim” body.

Taylor immediately released her reaction on Twitter, commenting, “I’ve done nothing but love & support you. It’s unlike you to pit women against each other. Maybe one of the men took your slot.”

Nicki ultimately clarified that her rant wasn’t even directed at Taylor but that didn’t stop Katy from weighing on the matter.

In 2017, Katy spoke out about the feud and offered her own perspective. She claimed that it was Taylor who had created the bad blood.

Honestly, it’s really like, she started it, and it’s time for her to finish it […] I tried to talk to her about it, and she wouldn’t speak to me. I do the right thing any time that it feels like a fumble. It was a full shutdown, and then she writes a song about me, and I’m like, O.K., cool, cool, cool, that’s how you want to deal with it? Karma! But what I want to say is that I’m ready for that B.S. to be done.

It took a long time but by 2018, the ice had begun thawing between the two of them. Katy is forthcoming with the public on how much she wants to end the feud.

I am ready to let it go. I forgive her and I’m sorry for anything I ever did, and I hope the same from her. I think it’s actually like, I think it’s time. There are bigger fish to fry, and there are real problems in the world.

Katy Perry on The Thrive Global

Katy added that she’s “always” loved Taylor but also noted that they’ve had their differences over the years. Katy also sends a gift to Taylor shortly afterwards, for which Taylor expresses her gratitude on Instagram. At that point, all signs are pointing to a feeling of respect the two share for each other, even if they hadn’t reconciled just yet.

In June 2019, Katy Perry posted a photo of cookies on her Instagram and tagged Taylor in the caption. The plate of cookies reads in frosting, “Peace at last.”

However, the final confirmation that the two had indeed made peace arrived in the form of Taylor Swift’s ‘You Need To Calm Down’ music video. At the end of the video, Katy Perry’s character is seen timidly hugging Taylor Swift’s character and the gesture had said everything that needed to be said about their renewed friendship.

Recently, Katy elaborated on her decision to mend things with Taylor. She said she wanted to set a good example for young girls.

What I’m so grateful for is that we did get to make up and we made up publicly to be an example of redemption. It’s hard for young girls growing up [with] cliques and high school and pettiness and all that stuff. Now we’re super friendly. I’ve always wanted the best for her and we can talk about the best we want for each other.

Taylor herself discussed reconnecting with Katy and said that she believes she and Katy have different ways of processing “pain, confusion, misconception.” They also shared a “long talk” over tea and spent catching up on each others’ lives.

Holding on to resentment does nothing in the long term

There are many, if not most, parts of Taylor and Katy’s relationship that can’t be applied to ordinary folks. These are ultra-successful superstars that have their own legion of fans defending each and every one of their choices. You might not have that. However, it’s undeniable that you may face a falling-out with somebody.

It happens in all parts of life, whether that’s your spouse, your family member, your coworker, or a close friend. Sometimes there’s a miscommunication or someone inadvertently offends you, and that’s all it takes for the relationship to slowly crumble.

Though you can’t salvage each and every broken relationship in your life, what you must learn to do is not hold resentment. Forgiveness isn’t appropriate or instinctive in many cases, so it might not be the solution for you. But what you can do is free yourself of the anger and the resentment.

And free up your energy to focus on subjects that truly need your attention. Holding onto feuds and further letting that hate fester in you will only bring you pain. Whereas letting go of it and taking measures to reconcile, whether with yourself or the other person, is the only way you’re going to move past it in a healthy way.